Enterprise for Research, Innovation and Knowledge

The program provides up to $2.5 million annually in seed support for cross- and interdisciplinary research 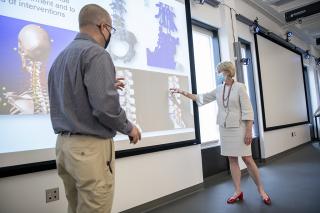 Towards these goals, the President’s Research Excellence (PRE) program provides seed support for cross- and interdisciplinary research that have the potential to attract external funding. The program was established in 2021 with an annual budget of $2.5 million.

A lead PI for this program must be a faculty member, either tenure/tenure track or research, or a clinical-track faculty member who is engaged in research. PI status at Ohio State is required for all lead PIs. Co-PIs can be faculty, research staff or post-docs from intellectually distinct disciplines.

See the 2023 program RFPs below for full eligibility requirements, restrictions and deadlines.

Since the program began, 43 teams of Ohio State researchers have been awarded $3.3 million through the President's Research Excellence program. Learn more about the awardees and projects for both grant cycles.

Have questions or want to know more?

The Accelerator proposal timeline includes one round of proposal submission that includes a 2-page narrative.

Back to Office of Knowledge Enterprise home

If you have a disability and experience difficulty accessing this content, contact the ADA Coordinator's Office at ada-osu@osu.edu.